When the family silver needs to be brought up to date 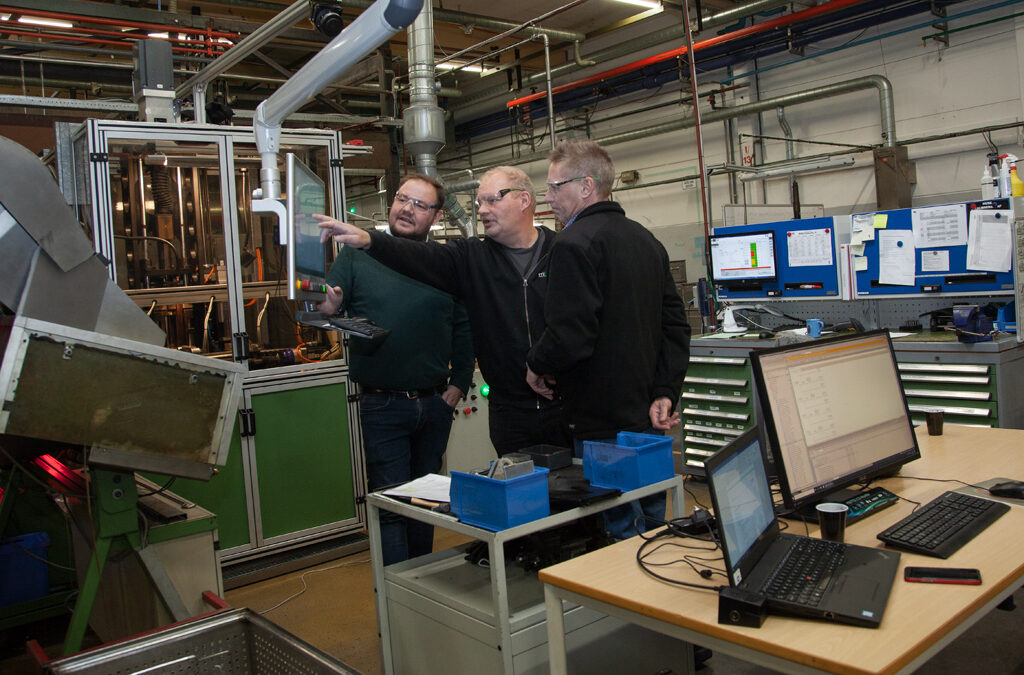 When Danfoss was forced to go on eBay in order to find spare parts for one of the industrial giant’s most important machines, there was no denying that the time had come to bring the family silver up to date – and indeed to future-proof it. Close collaboration between Danfoss and Trimatic Automation has ensured that production has not been affected, despite the machine’s key function in the production process.

At the heart of a large number of Danfoss’ products such as radiator and refrigerator thermostats you will find bellows. The bellows make up an actuator which in principle acts as a spring. Ever since the mid-1940s, Danfoss has produced its own bellows; indeed, founder Mads Clausen was involved in the development and design of the first bellows moulding machine.

Since that time, Danfoss has installed more than one billion bellows in the company’s products, with bellows remaining at the heart of Danfoss today and an integral part of the company’s DNA. So when Danfoss’ bellows moulding machine, which produces many millions of bellows every year, was facing a much-needed update, major planning was set in motion.

– We only have one bellows moulding machine, and if it fails, 60% of production at our factories in Poland, for example, will grind to a halt. We assess all our machines once a month, and a clear picture soon began to emerge that we were unable to obtain either support or spare parts for the moulding machine, which is from 1996. We had to go on eBay to find the parts we needed, and if, for instance, a chip failed, we had no way of knowing when we would be up and running again. So it was about time that we updated and future-proofed the bellows moulding machine, explains Production Manager at Danfoss Autoformer, Hans Andreas Hansen.

Peace of mind and trust are key
As part of its planning, Danfoss increased the production of bellows for an extended period, such that other parts of production would not be affected by the downtime that would inevitably occur in connection with the upgrades, which included the replacement of the entire control system on the machine. At the same time, Danfoss had to find the right partner to bring the family silver up to date and to ensure that downtime for the moulding machine would be as short as possible.

– We invited bids for the highly complex task of bringing the bellows moulding machine up to date. We’re right at the heart of Danfoss, where great swathes of the production chain will be affected if things don’t run as planned. So both peace of mind and trust throughout the process are vital parameters. Our choice, which was based on a combination of competence, chemistry and price, fell on Trimatic Automation, which had also previously solved several complex tasks for Danfoss, says Hans Andreas Hansen.

No standard solution
The bellows moulding machine functions by means of a robot inserting the bellow pipes into the moulder, following quality inspection and approval by an automatic imaging system. Future-proofing the machine required both a new robot, which was supplied by Denso, and a completely new control and imaging system developed by Trimatic Automation.

Senior programmer Dan Dethlefsen from Trimatic Automation was assigned to the task, which initially required comprehensive understanding of every little detail of the old control system.

– We were given a great deal of help by Danfoss: in particular, we enjoyed a close working relationship with Claus Mathiesen, who developed the original control system more than 20 years ago. So we’ve really been able to get under the skin of the system and the bellows moulding machine. This has enabled us to get a clear picture of the challenges, requirements and possibilities related to the task, which included a requirement that it should be easier to start and stop, select order, troubleshoot and pre-program the moulding machine, says Dan Dethlefsen.

On the basis of in-depth research and thorough investigation of everything from old drawings and subcomponents to obsolete software and functionality, Trimatic has subsequently developed the new control and imaging system and built a new control cabinet for Danfoss’ bellows moulding machine.

– We’ve developed and built it from the ground up – both the software and hardware for the control system. There really is only one Danfoss bellows moulding machine, and it’s also quite unique in global terms. So of course there aren’t any standard solutions, says Claus Sørensen, who is CEO of Trimatic Automation.

Successful process without any impact on production
On the part of Danfoss, eight weeks’ downtime was planned in connection with the updating of the bellows moulding machine.

– After eight weeks we were up and running again, with production not being affected anywhere, which has been absolutely critical for us. Our updated and modern bellows moulding machine is running faultlessly. It’s been a successful process based on a good, close working relationship, says Hans Andreas Hansen.

Trimatic has also been delighted with the exciting project and ensuing collaboration with Danfoss.

– Of course, it’s been a unique experience to venture so deep into the engine room and be able to polish the family silver. Together, we’ve created a solution which we’re very proud of. For us, the highest praise has been the fact that the hotline hasn’t rung, and everything is running as it should – and then of course that we’ve already been asked to make bids for new and exciting Danfoss projects, concludes Claus Sørensen.